Once again, Christian evangelists have abused Buddhists and Muslims, this time by the National University of Singapore (NUS) Campus Crusade for Christ (CCC): 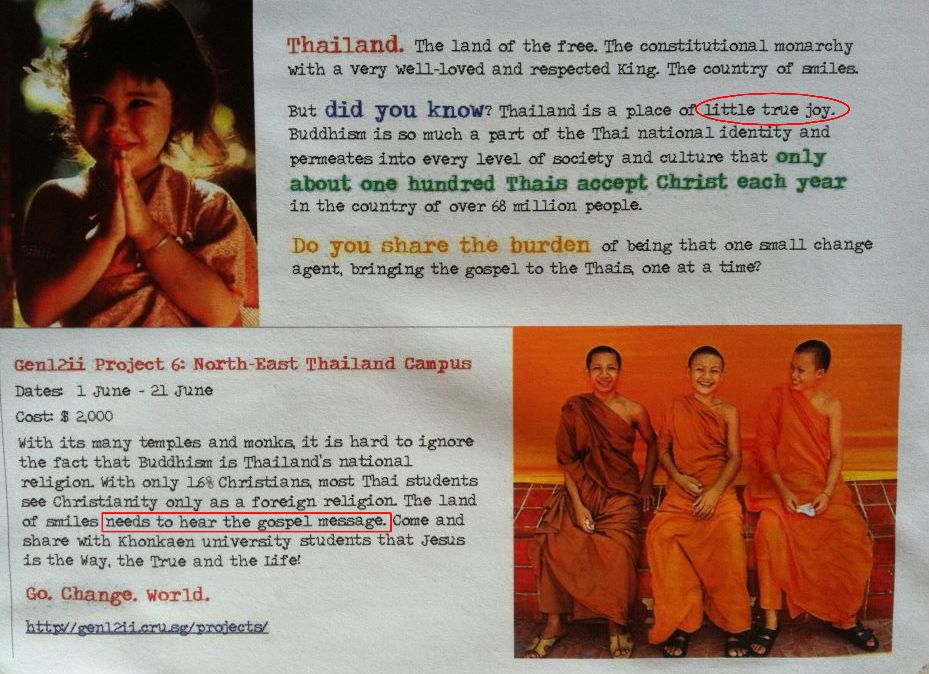 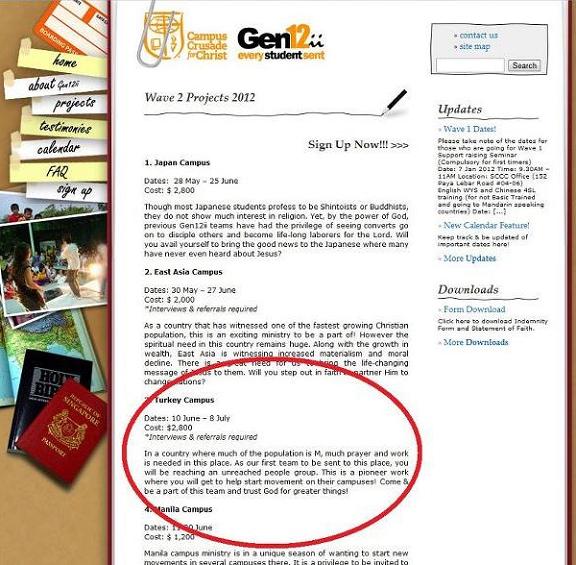 The small text circled in red above reads:

“In a country where much of the population is M, much prayer and work is needed in this place. As our first team to be sent to this place, you will be reaching an unreached people group. This is a pioneer work where you will get to help start movement on their campuses! … …”

Please make a stand and tell the insensitive religious zealots that enough is enough. Check out and LIKE the Facebook page Say Yes to Religious Harmony.

It’s ok to discuss and compare religions but it’s a no-no to abuse others’ religion no matter how “well-intentioned” you are or how much you “love” them. How can you love someone when you don’t even respect the person in the first place?

“Once I was called to a village for some antenna work. When my two friends and I had finished their work, we passed a local church on our way to the car.

There were about 250 poor people waiting to go inside the church. 3 priests, in long white ropes, were ordering these people to step on pictures of different Hindu Gods, which they had placed on the steps of the church. This was to prove that they had renounced the Hindu Gods by converting into Christianity.

Later, it came to my knowledge, that they were also ordered to burn pictures of our Hindu Gods. My friends and I were very shocked, because if you stepped on pictures of Hindu Gods, it’s very difficult to return to the Hindu faith.

Poor people choose to become Christians, because the Church promised them advantages, things that would take the Indian government a long time to deliver, and they promised them healing from all diseases just by coming to the Sunday prayers in the church.” 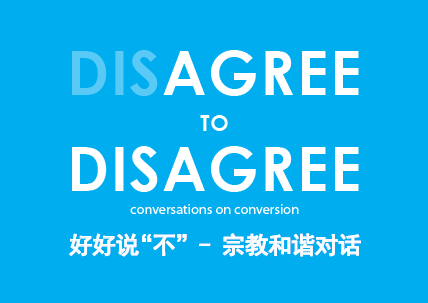 It is important to Agree to Disagree.

Prime Minister Lee Hsien Loong highlighted the importance of maintaining racial and religious harmony through tolerance and restraint, as well as preserving the common space that all Singaporeans share.

Deputy Prime Minister Wong Kan Seng observed that amid the increase in religious proselytisation activities, security concerns are thrown up when “overzealous and self-righteous” followers engage in aggressive and insensitive propagation of their faiths.

Find out how to support Buddhists who are facing proselytism in their workplace, school or even at home, so that they can maintain their stand with compassion and wisdom.

Say “No” compassionately to religious proselytism.

These offensive video clips were subsequently removed on the church’s website but they had already made their way onto YouTube.

The Government’s Internal Security Department (ISD) hauled up the Christian church leader and told him that what he did was wrong. ISD told him that in proselytising his religion, he must not run down other faiths, and must be mindful of the sensitivities of other religions.

Pastor Tan has apologised after being called up by the ISD.

What is your reaction to the insensitive remarks made by Pastor Rony Tan? | TODAYonline

﻿﻿S’poreans must not run down or trivialise others’ beliefs: SM Goh | ChannelNewsAsia

Not Secular Feminists But Sectarian Fundamentalists: And They’ll Come For You Too

At the end of March, AWARE held an AGM attended by a large bloc of new members, many of whom had not previously been especially active in the organisation (according to the Straits Times, a large majority of them had only joined the organisation in the preceding 3 months). They proceeded to elect a new executive committee dominated by anti-gay activists. The new President (who has since, bizarrely, resigned), Claire Nazar, has publicly said that in her interpretation of her religion, Christianity, homosexuality is an ‘abomination’ and ‘the [result] of sin and flouting of God’s moral order’. The new honorary secretary, Jenica Chua, has previously criticised NMP Siew Kum Hong for his support for the legalisation of gay sex by referring to ‘the homosexual agenda’ and ‘the homosexual interest group’, language which originates from Christian fundamentalist movements in America.

Their supporters at the meeting included more individuals with clear connections to anti-gay Christian fundamentalist activism. Among these was Angela Thiang, who works in a company headed by infamous anti-gay Christian NMP Thio Li Ann, and who has publicly spoken in favour of Section 377A and in opposition to abortion rights. There was also Dr Alan Chin, who has used the language of American Christian fundamentalists by referring disapprovingly to ‘the gay lifestyle’.

Many of the members who voted for this new executive committee had only joined recently and were not well-known to active existing members of AWARE – suggesting that they were a new faction, rather than representing and reflecting the existing values of the group. In other words, the organisation appears to now be run not by secular feminists but by sectarian fundamentalists. It is likely that they will use it to push through a new agenda, promoting visions of gender, sexuality and women’s rights which are contrary to what AWARE previously stood for.

This has severe implications for women’s rights, LGBTQ rights, and civic society at large. Even if you consider yourself wholly indifferent to feminism or LGBTQ rights, please sit up and pay attention. They could come for you next.

Read the full article at http://www.glass-castle.org/issue20editorial.html

Get free ebook:
Agree to Disagree -
Conversations on Conversion